It had always been Earl Jamison’s vision to have a carousel in Peddler’s Village that was fun, exciting, and visually stimulating to children, but also elegant and beautiful for the adult enthusiast. This commitment is evident in the fully restored 1922 Philadelphia Toboggan Company (P.T.C.) carousel installed in 1998. 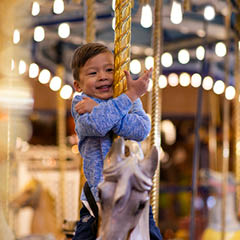 In January 1998, Earl Jamison, founder/creator of Peddler’s Village, found an antique carousel in deplorable condition, stripped of its original figures, that he would save and return to its opulent glory. The normal time required to restore a carousel of this magnitude would be a minimum of two years, but Jamison insisted on an accelerated completion date as to minimize the down time and not disappoint the many Peddler’s Village visitors. There would be no compromises in the quality of the restoration even with the tight time frame. In order to complete this task, both local and national craftsmen and artists were hired. They were all eager to take part in this unique opportunity.

Master Carver Ed Roth from Long Beach, CA was commissioned to custom carve 46 figures in bass wood using the traditional techniques of master carvers from a century ago. The Learning Channel, a cable network, filmed a hour-long program on Ed Roth featuring the figures he was carving for the Grand Carousel. Roth was instructed to reproduce exact copies of some of the greatest carousel figures ever carved. The Illions Supreme-style outside row jumpers have delicate manes, real horse-hair tails, and as many as fifty glass jewels inlaid in their beautiful trappings. The large Muller-styled Armored King horse is magnificently reproduced in every detail. There are many menagerie animals as well, including a Dentzel-style lion, goat, giraffe, one spotted hog, and two rabbits.

Built in 1922 in Philadelphia, P.T.C. #59 is one of the grandest carousels ever produced during the Golden Age of Carousels. P.T.C. is known for top-quality machines that are both durable and beautiful. They produced a total of 89 carousels; only 26 still exist today. Each of their machines was sequentially numbered, ours being the 59th one produced. It had been in storage for over 13 years and was in need of a great deal of work. Earl Jamison saved this carousel from being stripped for parts knowing that it will bring great joy to all who visit the Grand Carousel and Peddler’s Village.

First Exhibited
P.T.C. #59 was the company’s showpiece at the 1922 National Association of Amusement Parks convention in Chicago.